Last spring for my Environmental Systems class, I did extensive research, with my friend Mandi, into the fact that we never want to live in Topeka, Kansas.  Climate wise, it lacks few redeeming qualities, and those are that it is never quite as hot as the Mohave Desert nor quite as cold as Antarctica.  But it does it’s damnedest to compete, and thus comfortable maybe 4 days of the year. And we weren’t even considering the tornadoes, since as far as the class was concerned wind only moves in really predicable straight lines that are easy to map.

But what I found most abhorrent about Topeka was its summer.  Not only was it very hot, it was incredibly humid.  And from the perspective of a person trying to design a sustainability oriented heating and cooling system, this means automatic failure.

Most sustainable cooling systems rely on shade, channeling breezes. In dry climates the introduction of moisture in the air via a swamp cooler or a fountain can be an incredibily effective method of raising the comfort level.   However, there is no good way to deal with humidity. Pulling water vapor out is much more difficult, especially without installing an air conditioning system which uses a large amount of energy.  It goes without saying this was frowned upon, since the goal was design a viable alternative to a normal energy sucking and planet destroying HVAC system.  There are some desiccants that can reduce humidity in smaller scales (the best example are the little packets that come with your shoes, or how you can put some rice in a salt shaker to keep it from sticking[1]). However, the amount of desiccant that would be needed for large-scale removal of moisture from a house is impractical and likely expensive. Furthermore, extracting absorbed water from the desiccants to prevent them from reaching a maximum capacity of water retention is difficult, so it would be more practical to instead regularly replace the saturated desiccant which would drive up costs.  So that system is unhelpful.

However, Mandi and I prevailed and this is the system we came up with, which did include an HVAC system and the insistence that it would only be used on the really awful days (because if our client is insisting on these sort of measures then they are serious about being sustainable). 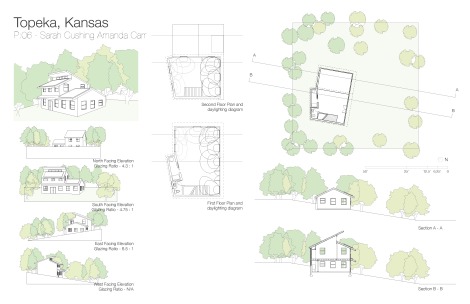 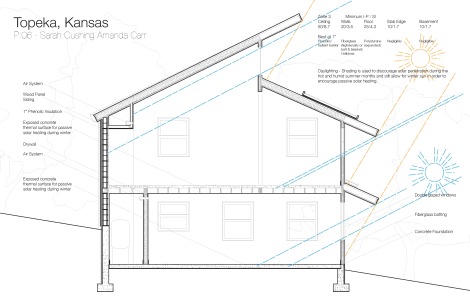 However, the sustainable designer may someday be able to circumvent this horrendous problem, thanks to this man and his invention:

Edward Linnacre’s (aka epic ginger engineer) AirDrop Irrigation system is designed to help circumvent drought and allow farming in places such as the Mohave desert, which are even worse than Topeka.  From the James Dyson Award website (whose competition he won) we learn:

“Extensive research into droughts revealed an increase in soil evaporation and trans-evaporation (plant and soil) due to the increasing temperatures. Airdrop Irrigation works to provide a solution to this problem. Moisture is harvested out of the air to irrigate crops by an efficient system that produces large amounts of condensation. A turbine intake drives air underground through a network of piping that rapidly cools the air to the temperature of the soil where it reaches 100% humidity and produces water. The water is then stored in an underground tank and pumped through to the roots of crops via sub surface drip irrigation hosing.”[2]

If that was too much text feel free to instead examine the pretty excellent graphics detailing the airdrop below.

This is some pretty impressive engineering, and it has the potential to save many lives. However, I suggest taking the technology in a different direction simultaneously.  If his invention can collect and condense enough water from dry desert air to keep plants alive, think what it can do to collect and condense water from humid air!  Not only that, it has the beginning of a (admittedly very small scale) geo-exchange system within the prototype already, in order to condense the water vapor and store the collected water for irrigation. The system could theoretically be enlarged to collect a much larger amount of condensed water vapor from the more humid conditions in Topeka. Then, instead of storing it in a tank, the water could be routed through a normal geo-excahnge system, and used to cool/heat the building.

Which means I could completely eliminate the HVAC system from my project.  Which means someday we could create a sustainable, and livable, Topeka!

Life, the universe and everything

The latest news on WordPress.com and the WordPress community.

an exercise in creativity